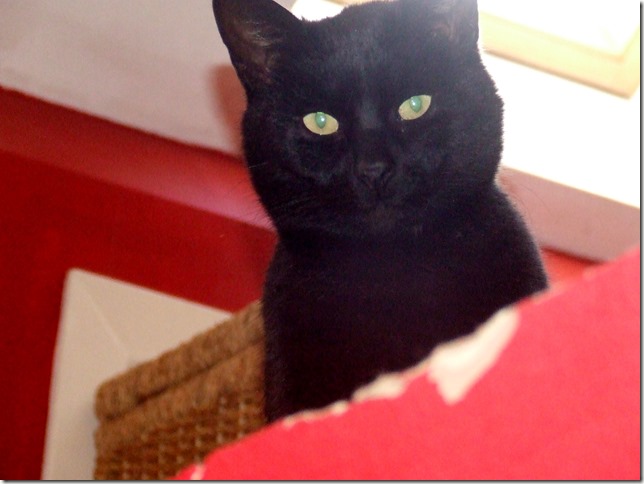 Do you have a pet? Describe your house from the perspective of your pet.

Yours Truly, Confused has signed herself up for a bunch of blogging challenges lately, so she is not doing her secretarial work for us furry dignitaries very well lately. She has even been so cheeky as to have me as a guest-writer on her own blog, Occasional Stuff, for a NaBloPoMo February 2014 assignment. O well, I suppose I have to humour her, so here is what I wrote:

I moved into my new home last with my brother Mr Kit-Kat last October.  The move came as quite a surprise to me, especially when I found that there were three HUGE dogs in residence already.  The week we moved in there was another one staying there while his guardians were on holiday. It was pretty daunting, let me tell you. The first night we stayed in a place called “attic” which was away from The Dogz, and that suited me very well.  There were all sorts of interesting things to check, and even better, there were mice to hunt down. This place was supposed to be our home base so the human left lots of toys and plants that we like to make us feel at home. 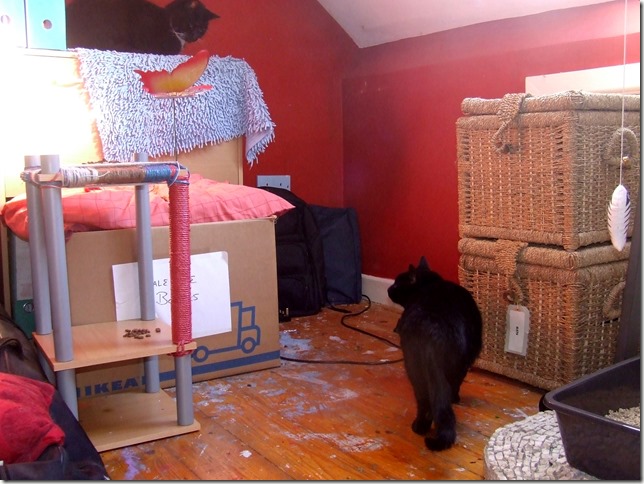 In attic there are all sorts of strange-looking things that the human refers to as gym equipment.  They are just brilliant for climbing, swinging and jumping. There are boxes to hide in and wicker crates to perch on. They do pretty well as scratching posts too.

However, we are cats, so the very next night,  when everybody else was asleep, we snuck around the house to see what we could see.  There were several different rooms to check.  We especially like that if we go into the cupboard in the utility room, we can sneak through a hole at the back and come out under the stairs – it’s really convenient.

During our explorations, we found a place that we prefer to “attic” – it’s called “guest room”. There is a king-size bed and an ensuite bathroom, and a commanding view of the street outside, so we appropriated it.  The human took it quite well, and even erected a thing called “baby gate” so we could have some privacy from The Dogz.

In the hallways there are sparkly things that tinkle hanging from the ceilings – I learned they are called “wind-chimes” – I’m going to figure out some way to catch one of them, I swear. 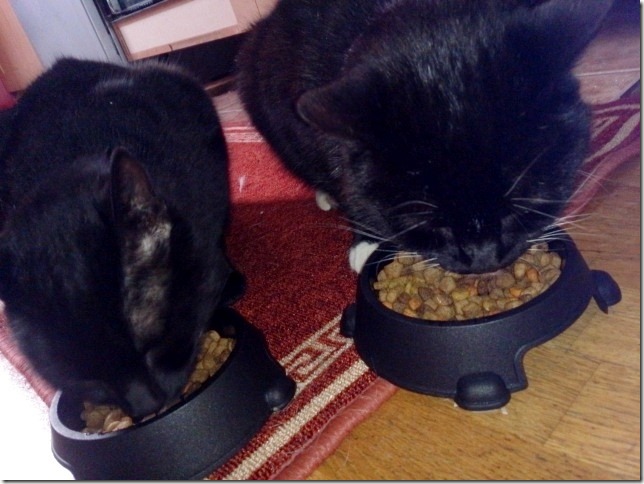 According to the human, for our own safety, we get room service instead of dining in the kitchen with the wuff-waff, which is quite nice. In the evenings, when the human comes home from work, we each have a shelf on either side of the fireplace where we can relax and give the feline finger to our canine housemates.  For our entertainment, she had pre-installed these glass box things full of water with bright coloured creatures that dart around inside them. This gives us hours of fascinated contemplation, and we often get so hypnotised by these things that we have to take a snooze on top of them. 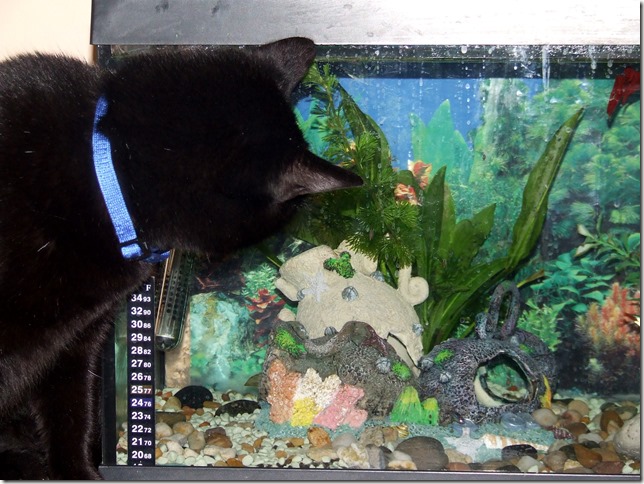 Out back there is a large garden that is pretty much a big soggy jungle at the moment. There are lots of shrubs and trees, and sheds and green-houses we can explore, although the human doesn’t want us to go into the shed where something called “robins” nest, so that door is mostly closed. But spring is coming, and that lawn mower is going to have to come out sooner or later. We can wait. In the mean time, we play Angry Birds to keep sharp. 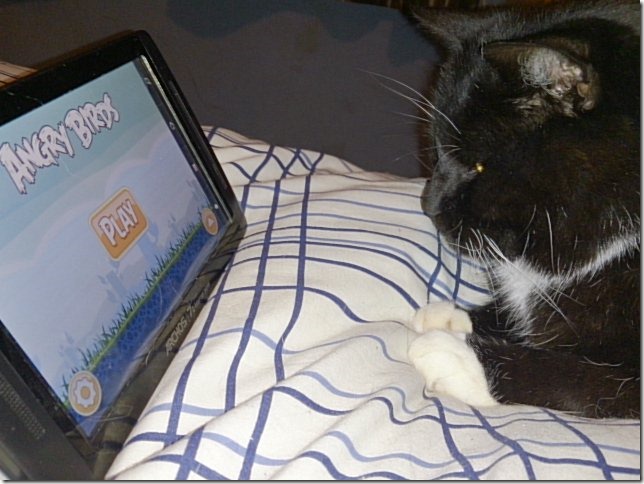 At night it is getting a little boring as the mice seem to have left, I have no idea why, we were having such fun with them.  Now we are working on how to open up those glass boxes to get those coloured things.  So far no success, but the human can’t watch us 24-7, and we are very enterprising felines. 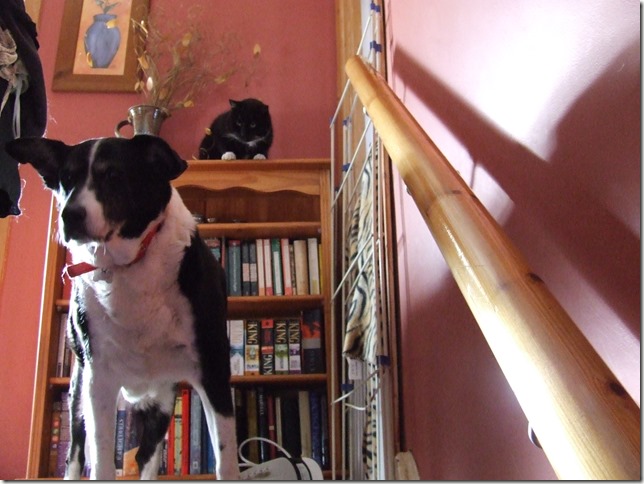 We are clearly VIPs here – two of The Dogz give us the utmost respect and every time the third one tries to chase us, the human tells her off.  The human also provides rides on her shoulder to help us avoid the recalcitrant canine  - as if we need help to outwit a mutt!.

All in all, I’m glad we moved in.  I’ll have to sign off now because Mr Kit-Kat has just beaten my Angry Birds high score – can’t let him away with that.

Email ThisBlogThis!Share to TwitterShare to FacebookShare to Pinterest
Labels: The arrival

But in the mean time, could somebody please help me get down from here?
Posted by Yours truly, confused, at 12:00:00 am No comments:

The Naming of Cats 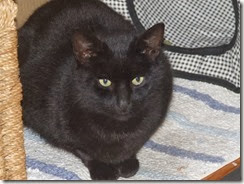 The Naming of Cats is a difficult matter,
It isn't just one of your holiday games;
You may think at first I'm as mad as a hatter
When I tell you, a cat must have THREE DIFFERENT NAMES.

First of all, there's the name that the family use daily,
Such as Peter, Augustus, Alonzo or James,
Such as Victor or Jonathan, or George or Bill Bailey -
All of them sensible everyday names.
There are fancier names if you think they sound sweeter,
Some for the gentlemen, some for the dames:
Such as Plato, Admetus, Electra, Demeter -
But all of them sensible everyday names.
But I tell you, a cat needs a name that's particular,
A name that's peculiar, and more dignified,
Else how can he keep up his tail perpendicular,
Or spread out his whiskers, or cherish his pride?
Of names of this kind, I can give you a quorum,
Such as Munkustrap, Quaxo, or Coricopat,
Such as Bombalurina, or else Jellylorum -
Names that never belong to more than one cat.
But above and beyond there's still one name left over,
And that is the name that you never will guess;
The name that no human research can discover -
But THE CAT HIMSELF KNOWS, and will never confess.
When you notice a cat in profound meditation,
The reason, I tell you, is always the same:
His mind is engaged in a rapt contemplation
Of the thought, of the thought, of the thought of his name:
His ineffable effable
Effanineffable
Deep and inscrutable singular Name.

Yeay!  Yours Truly Confused set me up on Facebook today!

Blogger Labels: Social,Facebook
Posted by Unknown at 11:25:00 am No comments:

If the cap fits 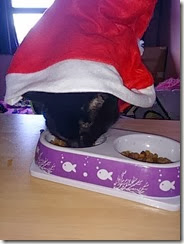 Well, it doesn’t.  However, as it is Christmas and there’s a nice lunch in front of me, I’m prepared to co-operate, even if Yours Truly Confused does try to smother me with this ginormous Santa hat. At least it hides the red bow tie attached to my collar.
As Mr Kit-Kat pointed out, at least I wasn’t taken on a walk round the neighbourhood dressed like a reindeer.
Happy Christmas, people!

I want to connect 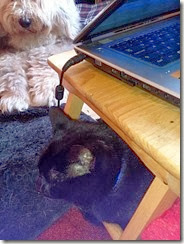 I’m sitting here under the laptop while dictating my blog to Yours Truly Confused (you didn’t think I could type all this myself, did you?)

The Diva tells me that she, Princess Chloe the First and The Big Guy all have their own Facebook pages too, so I’m going to demand one for myself.

NB, I quite like this table thing, just like my Christmas tree, it makes me look tall.